Like many small places, the Island’s fate often hung in the balance of larger events. The mid-18th century struggles between Britain and France would see the map of North America re-drawn more than once. The most dramatic off these changes came in the wake of the 1759 British victory at the Plains of Abraham. The majority of France’s colonies in North America would be passed to the British as a result of the 1763 Treaty of Paris. Britain now found itself in control of a vast territory with untold resources and potential. The key to unlocking this potential lay in a clearer understanding of the territory’s geography. The man who would provide the key was Samuel Johannes Holland.

Samuel Johannes Holland (1728-1801) was born in the Dutch town of Nijmegen. After an early career in the Dutch artillery, Holland emigrated to England in search of greater professional opportunities. With a newly-minted lieutenants’ commission in hand, Holland soon found his opportunity in the brewing conflict between the British and French in North America. Holland first travelled to the colonies as an officer in the Royal Americans Regiment. He was quickly immersed in the world of surveying, taking part in the mapping of the British province of New York. This would lead to Holland accompanying British forces in preparation for the final siege of Louisbourg in 1758. In the aftermath of this victory, he was ordered to prepare charts and surveys of the St. Lawrence River to aid in the ultimate assault against Quebec in 1759.

With the North American campaign at an end, Holland was quick to realize that good survey work was as important in peace time as it was in times of war. With his accumulated survey work in hand, Holland travelled to London in 1762 and proposed to the Board of Trade and Plantations that new maps were needed in order to facilitate future settlement. His proposal was eventually accepted, and in 1764 Holland returned to North America with a new title: Surveyor General of Quebec. Holland had been given the enormous task of surveying the British territory north of the Potomac River. As a warm up, he began by surveying tiny Prince Edward Island over the winter of 1764-1765. The Island would literally never be the same.

A plan of the island of St. John with the divisions of the counties, parishes, & the lots as granted by government, likewise the soundings round the coast and harbours
by Samuel Holland,
published by Andrew Dury, 1775
Image Credit: Boston Public Library

Holland divided the Island into 67 townships or lots which were disbursed by the Board of Trade and Plantations in a land lottery in 1767 to a variety of British politicians and military men. The consequences of this colonial experiment were to dominate the Island’s future development. These proprietors were tasked with the job of improving their lots and sponsoring new settlers to the Island. In 1769, they successfully lobbied the British government to separate the Island from Nova Scotia and its own colonial administration separate from Halifax was set up at the new capital named for Queen Charlotte, the wife of King George III.

By 1775, Thomas Jeffreys engraved a map detailing all the elements of Holland’s survey. The Island is shown divided into three counties, Prince, Queens, and Kings as well as fourteen parishes. Capitals were set apart for each of the counties at Prince Town, Charlotte Town, and George Town. Some of the former French place names such as Trois Rivieres became the Brudenell, Cardigan, and Montague Rivers. Stukely Town appears near where Havre St. Pierre was once located. This was the site of Morell House, once the grandest home in St. John’s Island. It was built by Robert Shuttleworth (1743-1816) an Oxford educated proprietor who briefly lived in the area. Greenwich (site of a future National Park) is noted on the north side of St. Peter’s Bay. All together, the Island is calculated to have 1,365,400 acres.

The decorative cartouche of the map emphasizes its potential for agriculture with a man walking behind a plough drawn by two horses, trees have been cut down, and a large fishing net with its catch close by indicates the rich potential of the Island’s waterways. 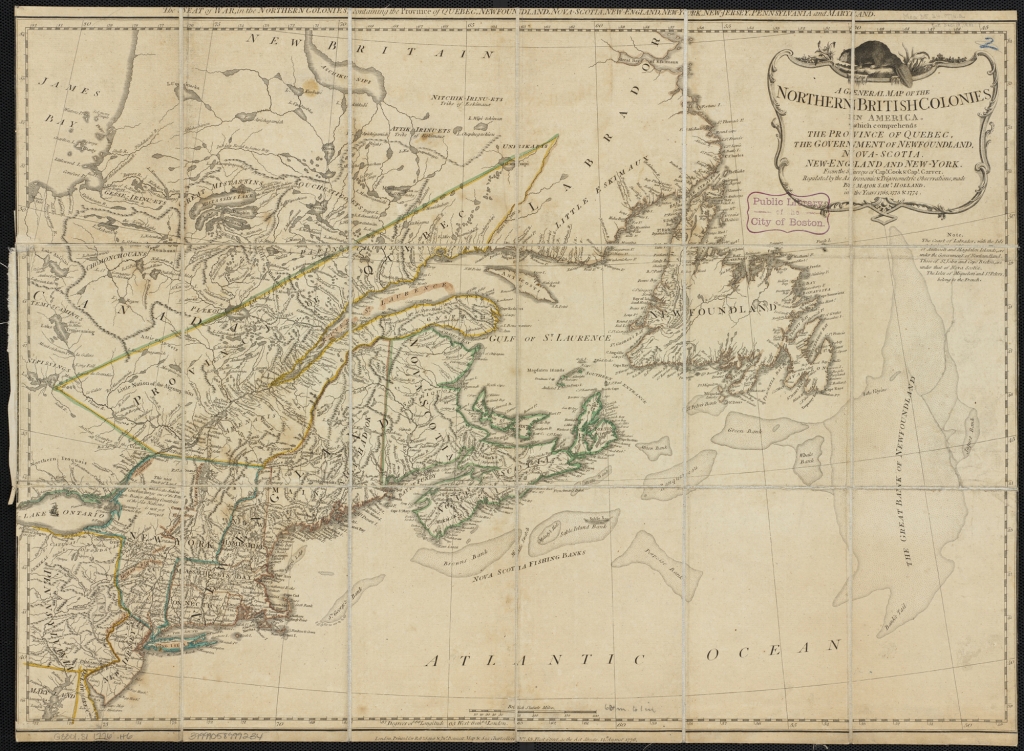 A general map of the northern British Colonies in America which comprehends the province of Quebec, the government of Newfoundland, Nova-Scotia, New-England and New-York, From the Surveys of Capt. Cook & Capt. Carver, Regulated by the Atronomics & Trigonometric Observations made by Major Saml. Holland, in the Years 1765, 1773, & 1774
published by Robert Sayer and John Bennett, 1776.

The now British character of the Island is shown in context with the other “Northern British Colonies in America” in another Holland map published in 1776. It is a culmination of all his survey work and includes many of the new names Holland ascribed to St. John’s Island. Interestingly, “Port Joy” is retained on the map across the harbour from Charlottetown. A beaver decorates the title of the map – an apt symbol to describe how busy Holland had been in the 1770s. This map, however, was already out of date with the American Revolutionary War now in full swing and the Thirteen Colonies declaring their independence on July 4, 1776.